Over the years I’ve been working to keep up with what’s hot in gaming. Even if it’s not a game I’m too excited about, I try to get an idea of what people dig about it. I struggle to find something that excites me not only on first impression, but also after 10 hours into it. My game of the year is undoubtedly Bloodborne for PlayStation 4, which singlehandedly sold the system for me, but it’s rare for me to find something that resonates with me so well.

For the most part I’ve been gravitating towards Nintendo’s games. These tend to be well designed and easy to jump in and jump out, without lengthy tutorials. You don’t have to put in heavy work to get some joy out of it. The multiplayer gameplay is also brings me back to Nintendo’s games, since it seems like the entire game industry outside of Nintendo has forgotten why game systems have multiple controllers. More often these days, I find myself gravitating towards older games.

My main game of the moment is Final Fantasy VII. 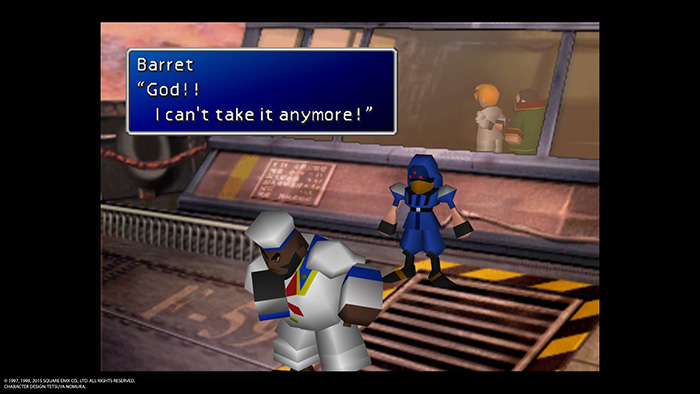 These fun moments make me smile.

I played through this game when it released. I was 13 years old. After playing Chrono Trigger and Super Mario RPG, I was hooked on RPGs. I couldn’t get enough RPGs and this was by far my most anticipated game. And what do you know? It actually exceeded my expectations. I long considered this my favorite game of all time. This fact was definite until I played through Xenogears and Ico. Then, it became a toss-up. Over the years I’ve dabbled in emulated versions of FF7 but never replaying it more than the first 8 or so hours, which the first arc of the story within Midgar. It took me about 60 hours to beat it the first time, so it’s a relatively small chunk of the game.

I’ve been replaying Final Fantasy VII as the newly released PS4 version. One thing that’s made it easier to get back into is that I can stream the game from my PS4 to my Vita. Now I don’t have to be on the couch, I can be anywhere in the house. I’m trying to make a habit of playing a bit in bed before I go to sleep. Being able to resume exactly where you left off at anytime makes it a lot easier to pace through.

There’s memories. There’s hype. In fact, there’s so much hype around FF7 that it made me unsure if the game was as amazing as it’s remembered as. I’m about 15 hours in, and so far I think it’s clearly as great as its reputation suggests. 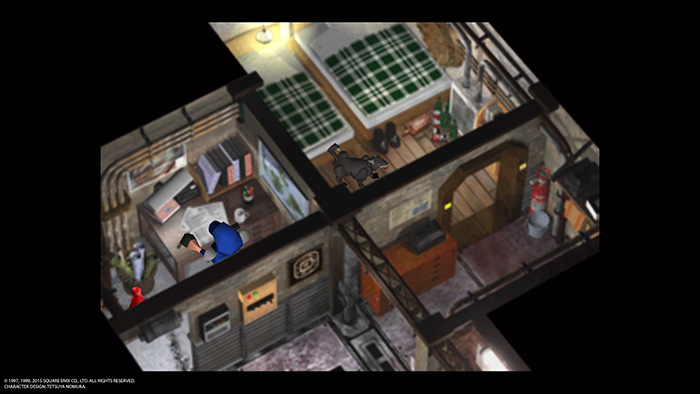 I still can’t believe how far ahead of the game Square was in their graphical presentation with this game. Even considering Donkey Kong Country was released a few years earlier, and Super Mario RPG the year before, there’s just an insane amount of high-quality, hand-crafted artistry in this game. It would be years before any other game studio could come close to their mastery of 3D art.

It could be seen that the popularity for FF7 would be based on it’s graphical fidelity which hadn’t been seen before in 1997. Fortunately beyond the graphics, there’s the same great gameplay, music and story that the series had always been known for. Yes, this is my love letter to Final Fantasy VII. You’ve got me! But I just can’t get over how much they nailed this game, and failed FF8 and many other games after.

I’m digging that the plot and characters are simple and archetypal enough to understand quickly. You’re lead into new scenarios every hour or so which are unique sidestories in new areas but still support the main goal (i.e. saving the planet). The characters aren’t too sure why they should continue their journey, but their leader Cloud holds them together. It’s borderline hokey but I think some of the charm and believability is due to it not being so completely cold and serious as later games in the series got.

The gameplay is so on point with a simple but highly polished and balanced battle system. Add to that the excellent Materia system and it’s easy to see why Square tried so hard to 1up it in later games. Battles can become tiring in areas with super high encounter rates, but overall I love the difficulty and how it still keeps you on your toes.

Anyway, so far so good. Right before FF7, I played through about half of the PS1 version of Chrono Trigger, on my PSVITA. Another classic masterpiece. An epic story that moves along at a much faster pace than I remembered. It reminds me to keep players surprised and looking forward to what may happen next. It’s interesting to compare and contrast the battle systems of Chrono Trigger and FF7. 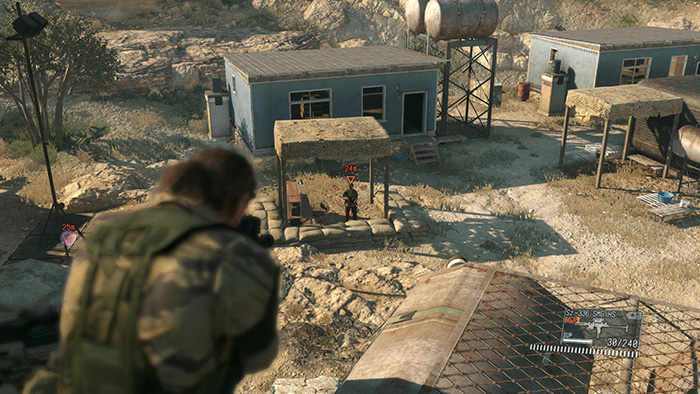 Either Bloodborne or Metal Gear Solid 5: The Phantom Pain is my most played game this year. I dumped hours and hours into this game, sweat dripping from my brow as I attempted to infiltrate bases undetected. These games are similar in that they are all about mastery of the gameplay mechanics. Using the environment to your advantage. And adapting to bad situations on the fly. I’ve finished every mainline Metal Gear Solid game and this game by far has the most polished control. For the first time I had no qualms with the quirkiness and felt like it was completely my fault when I get spotted by a guard. As much time as I spent with it, I only made it about halfway through the main missions. As the missions got more difficult and time consuming, I decided I needed a break. My main complaint is that I wish there were more story sequences, instead of the heavy reliance on cassette tapes for story. 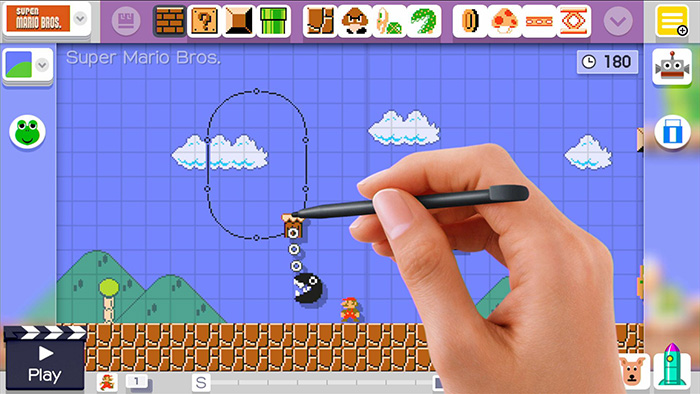 On Wii U I’ve been playing a bit of Super Mario Maker. Not as much as I imagine I would because I mainly just play it when friends come over to show them what it’s about. It’s a fun idea and it’s a good social activity to sit around the TV and pass the controller around, trying to beat the 100 Mario Challenge. The interface is great, with a heavy throwback vibe to Mario Paint. Simply brilliant execution — I wish I had something like this when I was a kid. My favorite stages are the puzzle-like ones that make you rethink all your abilities as Mario. This game even adds some new abilities (like the spiky shell helmet!). 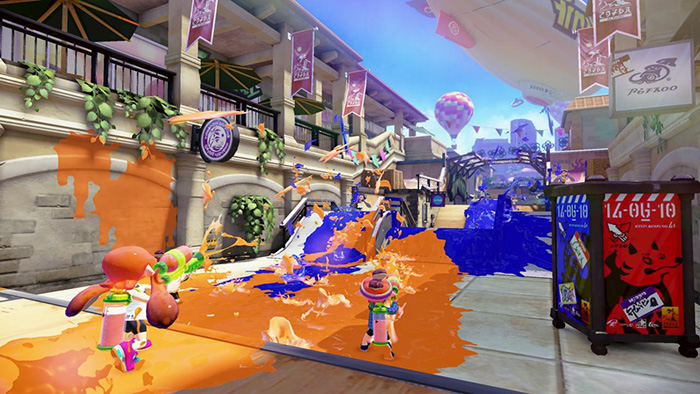 I played a good amount of Splatoon for Wii U as well. I went from “I could care less” to “Wow, what an amazing game!” overnight with this one.  On first glance, it looked like another multiplayer game I’d play for about an hour and get bored of. After playing the online network test for this game, I couldn’t get enough. Totally hooked. This game works great for me, a completely casual online gamer. I can jump in and out really quickly, and don’t have to pout about getting headshotted every 10 seconds like most online shooters. Brilliant game that I keep coming back to. The artwork is great as well.

Beyond those, I played a bit of Monster Hunter 4 on 3DS with coworkers. I played a bit of Final Fantasy 14 online with coworkers as well, only for a month though. I love these games but they’re such a commitment. I finished Escape Goat 2, which is a really amazing puzzle platformer. Not enough games that make you think out there! I played through Child of Eden, searching for inspiration for Raybeem. I played through The Order: 1886, a game that had a lot of potential but is still the best looking (consistently) game I’ve ever played. I just couldn’t get into FarCry 4. I fell in love with Yakuza 4! And a buncha other stuff.

That’s it! Had to let that out. These days I feel like I have to rationalize the time I spend playing games by studying them and finding out what I enjoy about them. It helps me out when I feel like my ideas have grown dull and I need a bit of revitalization. The breadth of games available nowadays is wider than ever so it always seems to strange to me to not have a game that I feel like playing for any particular moment. It’s easier for me to jump into something familiar since I don’t want to spend times learning complex systems for games I’m unfamiliar with. It’s a time sink and can be stressful when things don’t click from the get-go. But if I continue to stay in my same comfort zone, there may be a game that I’d love waiting for me that I’d never get a chance to check out. At a time, I had no interest in RPGs. Now many of my most favorite games are RPGs. I need to maintain that sort of open-mindedness and patience.

Filed under: Everything, Retro Reviews, Video Games, What I've Been Playing

Bryson Whiteman (http://www.sonofbryce.com)
Bryson is the guy behind all of the Sokay creations. Heading artwork and development, he's determined to make sure each game has a "distinctively Sokay" quality to them. He's always looking forward for a chance to experiment with new technologies to explore exciting ways to achieve fun.
« Custom Drag and Drop Events in Unity
The Sokay Clothing Journey so Far »