Donut Get! was my first serious attempt at trying to make some money with our games. Traditionally, internet culture said that Flash games were free. That was the world we grew up in, earning money was sort of a fantasy. Some people were selling the rights to their games to online gaming portals, but that wasn’t an interest of mine. Online stores like Steam were just starting to open up to more developers, but the short experience of Donut Get! didn’t seem like something I could sell unless I expanded it even further. So if I had to release Donut Get! for free, could I make some dough by selling merchandise related to our products?

Doing research on T-shirt creator forums, I quickly discovered that it was a complicated process. Initially, I was trying to do the shirts myself but I either had to invest in a vinyl cutter or silk-screening equipment. Either way, I would be out of a lot of time and money figuring these things out, in addition to not having the space for all this equipment. I buckled and figured out that I needed to order from a professional. I ended up ordering about 35 shirts from a company online, doing DTG (direct-to-garment) to allow us to use the Donut Get! “Box Art” image, drawn by the homie Matthew Harris. 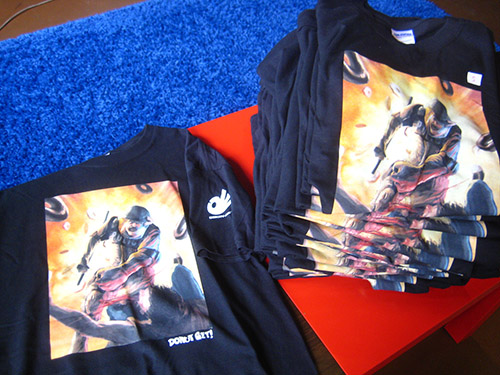 This fat stack is just a portion of all the Donut Get! shirts I ordered way back when.

At the time, I was hosting Sokay Play as part of a monthly show I was doing with my homies at the Downtown Los Angeles Art Walk. My thinking at the time was that I had a space to sell these shirts to people during the art walk. Unfortunately this arrangement ended the month that we finally finished Donut Get! I sold a handful of shirts to the homies during that event but I was mostly occupied with exhibiting the game to spectators. Indulging in the excitement of years of work coming to a conclusion.

Unfortunately that was the final Sokay Play during the DTLA art walk! Not having a shop, I tried a bit to sling the rest of the shirts to homies and family. Some people bought some, some people just wanted a hook up. I was happy to just have people sport something with the Sokay name on it. I took it as a loss, of course, but worth it for the greater good of promoting Donut Get! I didn’t dwell too much on it since I had quickly moved on to the development of The Crazy Program, our first game designed from the ground-up for mobile.

I’m no Daymond John, I realize I’m not a fashion designer so I haven’t been completely confident in the shirts I’ve come up with. Creating shirts and merchandise is fun to me though, as I mentioned earlier. Wouldn’t it be great if I could just make up some designs, and make shirts without a huge investment? Soon after that experience I discovered Spreadshirt, which has an on-demand service. I wasn’t happy with the quality of their printed shirts, which were sorta like iron-on looking, but their vinyl shirts were pretty good. It was quick and easy as well, and they offer you simple online shop. This gave me the opportunity to start experimenting more with clothing designs, all I needed was vector art. I love making vector art! No problem.

While I was experimenting with the Sokay Go! concept (creating HTML5 mini games for phone browsers), I had another shot at Sokay merchandise with Spreadshirt. I pulled the “Donut King” achievement icon from Donut Get! and turned that into a shirt and hat design. This turned out to be a hit, with people asking me “Where’d you get that hat?” Later on, I did a series of hats and shirts based on parody logos of Sega and Capcom, two companies that heavily inspired the feel we try to achieve in Sokay games like Thugjacker and LUV Tank. Our way of showing respect to the Gaming Gods. Practically anyone that’s grown up in LA has some love for the Raiders, no matter what city they move to. To show our LA roots, I designed a graphic which is a cross between the Raiders logo and “The Captain” boss from Thugjacker – both have eye-patches and I switched the swords to The Captain’s iconic hammer. 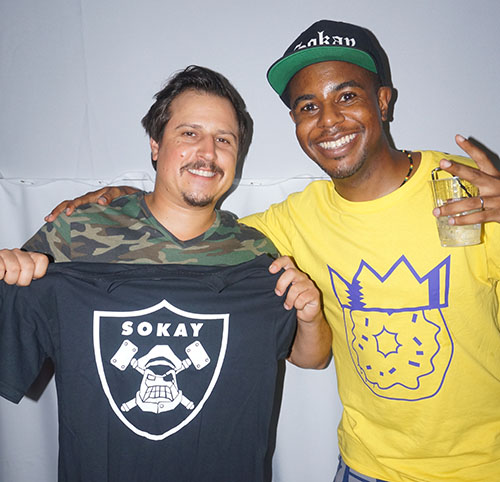 Now that Raybeem seems to be something that we’ll be demoing around Southern California often, I once again have an outlet that gives us an opportunity to put our merchandise in front of potential customers. In fact, during the first art show showing of Raybeem we ended up selling a Sokay x Sega hat to a total stranger. Just a dude that wanted to show support and have a hat nobody else had. That’s the coolest thing ever. 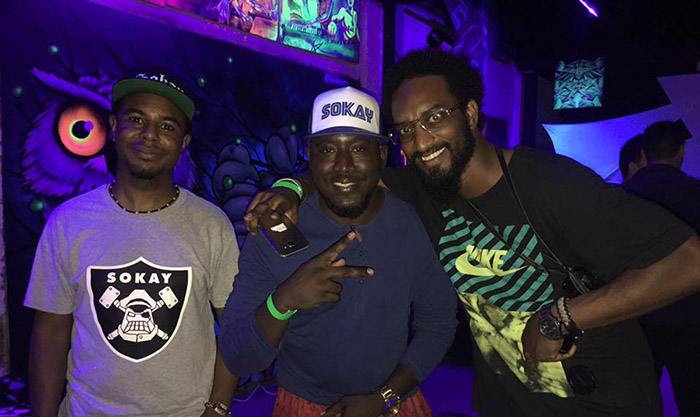 Big ups to the homies that bought our Sokay hat and tore up the dance floor in Raybeem! Taken at @GarageGalleryLA

So writing this post has made me realize that I should start experimenting more with one off designs more often, to try to gauge interest of people. For the Raybeem booth, I created a special Donut King shirt for the team working the booth. This one has a male (yellow and purple) and female (pink and white) variation. Cop one yourself at http://shop.sokay.net! 😉 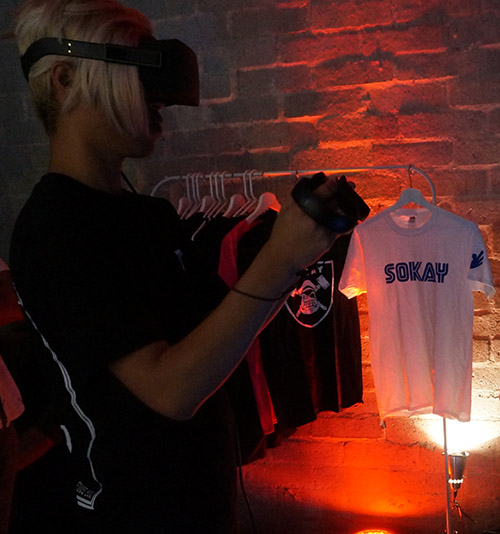 Sokay Shirts available when you try Raybeem at an event!

Thanks for your support! Raybeem’s coming soon, stay tuned!

Bryson Whiteman (http://www.sonofbryce.com)
Bryson is the guy behind all of the Sokay creations. Heading artwork and development, he's determined to make sure each game has a "distinctively Sokay" quality to them. He's always looking forward for a chance to experiment with new technologies to explore exciting ways to achieve fun.
« What I’ve Been Playing: Dec. 31, 2015
New Love for ‘Ghost in the Shell: Stand Alone Complex’ »