Unity GUI has a great drag and drop interface for calling public functions from your code when certain events are triggered. You can see this when using a UGUI Button script, it has an interface for calling your functions when the button is clicked. I was looking into a way to replicate this kind of drag and drop interface for my own projects and found that Unity has this functionality built in. There’s no need for custom UnityEditor scripts. I figured this out while digging through the source code for the Unity UI system.

It’s actually quite easy to setup something like this for your own project. This is great for UI Events but also for game events (collecting items, level complete, etc.). To accomplish this all you need is to make use of the UnityEvent class. Just to be clear, these aren’t the same as the standard C# Event system.

I created a CustomEvent class to drop onto the CustomEvent gameobject. This contains the code for setting up the UnityEvents. Here’s what it looks like:

Setting up the events automatically generates this interface within Unity.

From there, go back to your CustomEvent gameobjects, and hit the “+” icon for a blank slot to drop your DemoScript object into. Once you drop your object on there, the function dropdown will allow you to select a public function on any component of the gameobject. 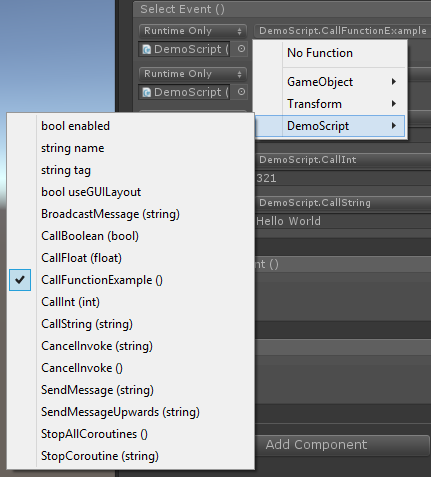 An example of the event dropdown.

You may notice that there are some types of functions that don’t show up. I believe the main reason is just that the interface isn’t compatible with certain types of function parameters. From my understanding, it works with these common types:

I’ve managed to get around it not supporting types like Vector3 by using another public variable in the targeted object’s scripts that can hold a reference to a targeted position. In the case of using a Color as a parameter, I’ll just refer instead to an integer index of a Color List or Array.

Here’s an example I setup for this demonstration: 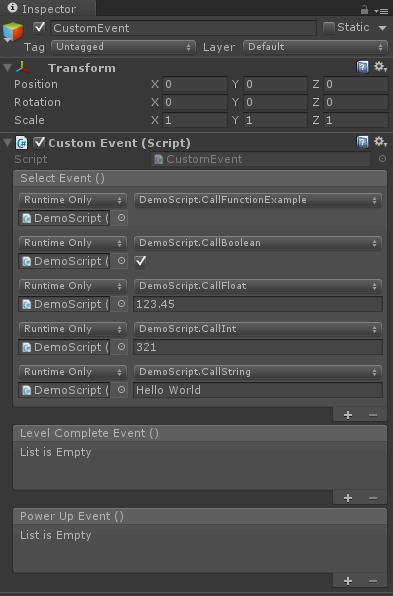 Now that the events are setup, you need to Invoke them. I added a simple function to check for a click in the CustomEvent class’s update loop to demonstrate how this works.

So when clicking, you should see something like this in the console: 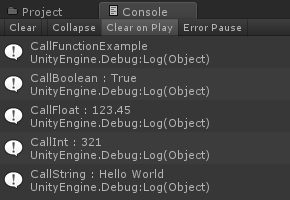 Similar to standard Events, remember to check if the event is null before making a call to it. You don’t want it to throw an error if there’s nothing assigned to the event.

One downside to this is that if you setup a bunch of events in your project and you end up wanting to change the type of event for some reason down the line, you could possibly lose all of these connections. It can be frustrating and tedious to re-set all of those connections.

And that’s it! You can download the complete example scripts below. Let me know if you’ve got any issues, I’ll see if I can offer some clarification.

Bryson Whiteman (http://www.sonofbryce.com)
Bryson is the guy behind all of the Sokay creations. Heading artwork and development, he's determined to make sure each game has a "distinctively Sokay" quality to them. He's always looking forward for a chance to experiment with new technologies to explore exciting ways to achieve fun.
« Getting Started w/ Oculus & Gear VR Development in Unity
What I’ve Been Playing: Dec. 31, 2015 »