Today marks one week since my last day with a full time job. I felt a pressure all of a sudden that I had to quit and go game dev. No more wasting time.

I’d say one week as an indie game developer, but that title doesn’t feel quite right before completing at least one game independently. Shouldn’t be much longer.

Before I left my previous employer, I was spending nights working on Bad Bones, losing sleep, time with my girlfriend, and feeling increasingly frustrated by how difficult it was to fit my passions into my life. 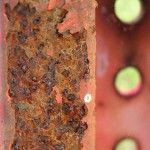 Bad Bones is a concept I like a lot. One that bears many of my feelings and thoughts on games, but it also represents a great deal of compromise. The hardest lesson I’ve had to learn is to effectively compromise my ideas. It’s hard because I’ve spent years teaching myself not to compromise. Too many artists are too willing to compromise and their work gets so diluted by the suggestions of others that eventually it’s tasteless. They take the scratchy, misshapen materials of their identity and sand down all the rough edges with what’s popular, what’s easy, what pays, or what some committee of peers finds palatable. All the sharp, rusty edges are gone and you get a nice, round blob. Nothing to poke anybody. God forbid you make something with meaning because somebody might be offended by it, or think its too artsy, too preachy. Every amorphous blob just tickles fancies and rolls away, disappears.

I don’t have to worry about any committees anymore. I’m okay money-wise with my savings, but that’ll end before long. So pay is on my mind. Monetizing games is a big deal these days with DRM dropping dead, microtransactions and subscriptions on the rise, Free2Play and so on. I’m keeping my fingers crossed hoping that selling a good product at a fair price is enough to cover rent. It’s all up in the air. Getting paid weighs as heavily as the work I’ve dreamed up that I can’t expect to earn me anything. And if I can get paid for what’s easy, that’s a temptation.

I thought about putting ‘temptation’ somewhere in the title of this post because I’ve only been on my own a week and that’s what I feel. It’s tempting to toss any sense of responsibility and burn up my savings working on whatever I want to work on. And it’s tempting to take a job with good pay (more than a lot of people can expect) and do secure work for years that I don’t need to give a damn about. It’s even tempting to pump out a string of crappy flash games, fill them with ads and build up a cash flow selling to every casual gaming site on the internet. Or to get some sponsors and spend my days skinning games for the new Maxi-Pads website or any number of toys looking for an online face. But instead of taking those, I’m sticking with limbo.

Offshore of nine to five, and surrounded by boatloads of freelancers, sponsored work, and full-bellied tower-defense developers, it is hard to dog-paddle without a number entering my mind that represents how long I think I’ve got until I’m treading water. That number is sitting down on my forehead, trying to suck up my stare. Make me cross-eyed. Weighs down on my nose, trying to flatten out the bend in my bridge. I’ve got a big nose. My nose is weird and I can’t breath right through it–never have. But I don’t need a damn number grinding the corner out of it. Smoothing my face out until I’m a big round idiot.

I’m trying an experiment. After IGCW, I put Bad Bones on hold to work on a small project. The idea is try to make a decent game as quickly as possible and sell it on FlashGameLicense. Try to form a development pipeline that can allow for quick, profitable games to supplement the larger, riskier projects like Bad Bones. My rough schedule is 1 week for 1 game. I’ve lost some time on a few things this week, but I’m doing okay. Not sure what I’ll have exactly by the end of this weekend, but I am doing okay. If this doesn’t work out, I guess it’s back to the drawing board. But that’s okay.

Don’t get me wrong about all this. If it’s not this pressure to find a pay-check it’s the pressure I felt before to be independent, doing good work that I believed in. There’s an element of madness in each one of those and each one will eventually drive you crazy if you let them. But there’s a chance here that I can kill both of these damn birds with one stone. I’ve got to give it a try.

It’s alright. I do my best work after throwing myself to the lion’s den.

« Independent Game Conference West ’09
Why Games, and why not Why »