Why Games, and why not Why

At the IGDA leadership forum in San Francisco Chris Hecker demanded that game developers ask themselves why they are making a game before they design it. Hecker is a renowned contributor to game graphical and physics technologies and a long time proponent of indie gaming. 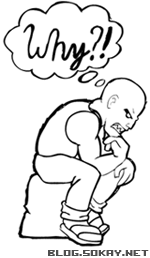 ‘Why’ is step one in any other art form, but Hecker is right. We don’t hear that question too much in games. It is my opinion that the earmark of great art is the purpose behind every choice involved in its creation. Even if that purpose is ambiguous at best, there must be justification for artistic decisions. But Hecker did a good enough job of making this point, so I’m going to say something that may be to the contrary.

I believe that many indie developers have already challenged themselves with ‘Why’ for some time, but there are other challenges. As Hecker points out, the way to exploit the strengths and weaknesses of games is not yet understood. This may explain why our ‘art games’ tend to be overly-abstract, even inaccessible, and still relatively shallow. Developers are forced into extreme formalism just to get over the steep learning curve.

I’m a formalist. I love formalism. But there’s more to art than form and frankly, I’m sick of abstract games. I want some damn content up in here. That’s why I call for developers to ask why less. As it stands, game developers are asking why for the wrong reasons. They’re asking why something is fun or entertaining, which leads to shallow, uninteresting answers. If they ask why in search of something deeper, that’s great, but I’ll set my expectations lower. We’ll get quicker results if we skip the whole why and go for an intuitive form of expression. I’m calling for something closer to improv. Stop looking both ways, and just cross.

When you forget about what other people think and just plop down what you gotta plop down, whether you like it or not, your work reflects who you are. Put yourself under pressure. Tie a gun to the back of your head and make sure that if you don’t finish a game–a good game–within the next 2 weeks, a bullet will go through your head. The definition of ‘good game’ will transform during those two weeks into two priorities: (1) What you can program quickly and (2) whatever comes to mind. The first priority depends on how good of a developer you are (which may be the flaw in this approach for many), but the second is what guarantees that your work will be artistically interesting.

Say you see a man with a unique wardrobe. That wardrobe can tell you a great deal about this man that he didn’t mean to communicate, like what he does for fun, what he’s up to now, the kind of work he does or how much he gets paid. You ask him where he got his shirt and he replies with 30 words. Out of those 30 words you might get an accent that tells you his place of origin. You might discern his political views or religious beliefs. You might discover he’s a racist, a reverse-racist, or that he’s just sensitive about the subject. You can learn any number of things from signals that are not designed at all to communicate the messages you are receiving. The man’s individual signature exists in every choice he makes–including the subconscious ones. If he is a game developer, his games will reflect his personality.

However, our expression can be stifled. As a staunch supporter of introspection and a sober, conscientious approach to art, I know there are times when action is more important than philosophy. We need games that don’t hold back and I believe unleashing our ideas is the way to make them.

Stream of consciousness game development. Maybe that’s impossible, but by working fast and flowing, we can get something close. Developers can focus on self-expression and proliferate. Games even be as short and simple as casual games, but the mechanics should have a context that makes them meaningful (which requires asking why, yes, but answer fast and start coding).

I would love nothing more than to see developers engaged in real philosophical argument about their medium, but right now that sounds like forcing sixth graders to study the Renaissance before you let them paint. Yes, they need to hear about Da Vinci, and yes, it will make them much better painters, but these kids don’t even know what they want to do when they grow up. Let them get their fingers wet, then assign some book reports.

There’s one problem with this plan. Games have been around a long time and developers aren’t discovering the same happy accidents that finger-painters do. That’s because of money. Hecker mentions that industry development is all about profits. So it’s up indies. What else is new.

Really, I agree with Hecker entirely, but I would hate to see indie developers slowing their productivity to find a ‘deep enough’ reason to make a game. Call me a devil’s advocate.