So yesterday was the 2nd and last day of the Independent Game Conference West. It was a good conference. I met a number of interesting people and felt very enthusiastic. The first person I met was this dude Marcus who gave me a high five for working on an RTS. He turned out to work for the Hotel, which made his excitement that much cooler. 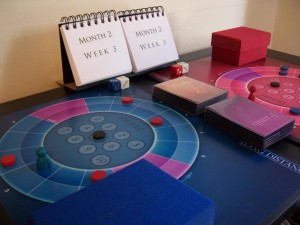 Day 1 started out all-business, but just when I was beginning to worry that this conference would be all about revenue streams and marketing strategies, I heard a great talk by Aaron Vanderbeek on how the relationships between players in a game can influence the way they play. He found a correlation between the closeness of a relationship between two players and their tendency to cooperate vs. compete. Very interesting concept that can lead to many other discussions (and did).

Then John Master Lee held a fantastic discussion on indie game marketing and how even a single man operation can do the job without a publisher. A lot of his advice stuck with me. He suggested emphasizing individuality, indulging in the indie’s role as David fighting Goliath, and gave some interesting tips on creating a fan base. For one, Lee claims that long blog posts are a waste of time because very few people read them and they take a lot of energy to write. That’s too bad because I have a lot more crap to say.

Another interesting tip from John was to hold contests, but only for small prizes. His experience showed that big prizes (like a big screen TV or a Wii at its initial launch) attracted ‘professional contestants’ (he called them ‘Soccer Moms’) that had no actual interest in your site or product. Small prizes more closely related to your game and your audience’s interests could excite and attract people that are likely to stick around. I realized then that I had not considered myself to be a potential ‘contest holder.’ I’m used to being one of a million potential contestants, but then John’s talking about people getting excited over a $10 prize–a toy from your game, a poster, or whatever. That’s something I can afford and it doesn’t feel like a slimy ploy.

John Master Lee’s advice seemed to coincide with that of Day 2’s key note speaker  Chris Swain. As Co-director of the USC Games Institute, Swain’s approach was much more academic, but he reiterated an indie developer’s need for originality. One of his slides was a chart put together by Jenova Chen to visualize the relationships between different game genres (as plotted between Arcade, Strategy, Action, and Simulation) and their rates of development. I found much of the academia to be pretty dubious (my usual complaint when it comes to video game theory), but I can support his point that mainstream games were being developed safely within the limits of well known genres and independent developers could take advantage of this tendency by innovating outlier concepts.

Swain also displayed a graph if the iPhone’s long tail. A platform’s long-tail is the curve which illustrates that platform’s sales per publisher. Generally you see a high number of sales on one end (where all the big publishers are), followed by a steep decline and a ‘long tail’ of small publishers. Independent iPhone developers can expect to sit along that long tail, which means zero revenue. The curve was so severe that while the top 5 apps were raking it in, even the 1000th app out of a million would be lucky to make a dime. While there was once ‘Gold in them thar hills’ as Swain put it, the iPhone is now a very saturated market.

The rest of my Day 2 was spent listening to how everyone in the business wants to screw you. I came from studying film where you can easily find yourself renting the equivalent of a pipe for hundreds of dollars, so there wasn’t much new in that sense, but the details were good. Bryan Sawler of Muteki told a surprisingly personal story about his ongoing uphill battle as the owner of a small game company: the mistakes he made and why it’s worth the fight. I wrote down these quotes:

“Business is about having no choice.”

That reminded me of someone’s criticism of a facebook game during the Vanderbeek talk:

“There are no choices. It’s not a game.”

“Our games, somebody else’s games, we just want to make games.”

Sawler’s plea was framed by remarks about making crappy games that may or may not be paid for by the client.

And finally, Sawler quoted an employee on why he went from finances to game dev…

“I wanted to earn my soul back.”

A panel made up of  Bryan, John Szeder, Paul Foster, Margaret Wallace, and Mike Cartabiano made it clear that not only are publishers a lot of abusive pricks, but contracts in general are evil and so are lawyers.

I for one definitely have to figure out contract crap. Just one of those things that sucks about trying to make something big happen. If you don’t put it down in writing lousy with legal jargon somebody somewhere can find a way to smash the whole thing.

On that note, I had a good time. I’ll keep my eye out for next year.

Oh yeah, I showed Bad Bones at game demo night! That went pretty well. People showed interest and asked a lot of questions, took a lot of fliers. The game was really in too early a stage to do much with it, but I went in knowing that so it was no big deal. I’m looking forward showing it off again when more of the selling points have been worked in.

Filed under: Everything, Independent, Sokay Network