The Art and Visual Effects of Call of Duty: MW3 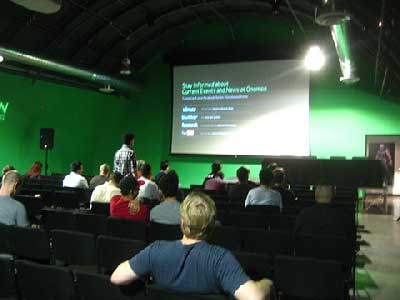 The Gnomon School hosts great talks on the making of games and movies. I’ve attended a couple of these talks before and they were always more impressive than I imagined them to be. The last one I went to was one by Naughty Dog, on the subject of the making of Uncharted, and I had attened a Wall-E session before that. It was a great talk that not only covered the visual side of development, but how the game design meshed together with it.

The latest talk was covering the visual effects of Call of Duty: Modern Warfare 3. The game was developed as a joint effort between two game development studios, Infinity Ward and Sledgehammer Games. 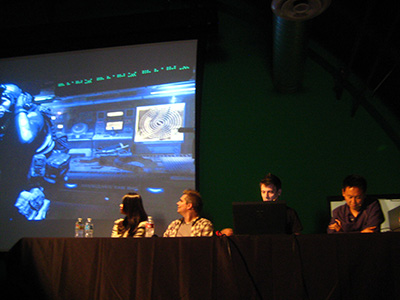 The first segment discussed lighting, the talk was given by Dave Blizard of Sledgehammer Games. He began his talk going over the history and significance of light.

He showed a slide of how a sun overhead can be a religious symbol and fascinates people because it is so unusual — showing pictures of tourists capturing the moments when the shadow is directly overhead.

He then uses this point to show how a directly overhead shadow in a game looks pretty terrible and bland.

For inspiration in lighting scenes, he would look to chiaroscuro in old paintings.

He then started to follow of path of advancements in the studies of light. To use these examples to prove that lighting is something that people have been fascinated with and want to know more about.

Then came the lightbulb, which allowed people to freely control this mysterious force. He talked about Thomas Wilfred‘s use of art as a medium.

Then he discussed examples of movies that inspired him to create worlds never seen before, like Star Wars and Tron. And shortly after 3d technology was being used in film and television. He focused on the huge jump in 3d technology just within 10-20 years, going from crude primitive models to full composited dinosaurs in Jurassic Park in a relatively short time span.

He then showed an art piece he created for Burning Man 2007, that made use of the sun.

Then moving to Call of Duty, he started with discussing how the constant challenge is to keep the game running smoothly at 60fps with the complexities of a scene.

The lighters try to match the lighting portrayed in concept art, as close as they can. He stopped to point out the many elements in the concept art that made the scene believable and told a story, i.e. in this abandoned city there were signs of looting, damaged cars, offices papers flying around, etc.

He showed the contrast of full bright mode (flat, no shading and full brightness) in comparison to lighting mode (with the proper lighting applied). He then showed how shadows affected the scene. This showed what the lighters do to bring the scenes to life.

He ended with an example of MIT’s light response studies and how they’ve been doing slow motion photography of how light bounces through and around objects. An example of the fact that even today, there’s still much more to be discovered about light. Check out more information on MIT’s visualizing light study here. 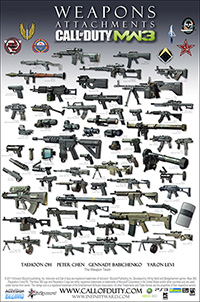 Weapons of Call of Duty: Modern Warfare 3 poster
The next speaker was Tae-Hoon Oh of Infinity Ward. He has created 90 weapons and 40 vehicles since Call of Duty 2. His presentation was funny and lighthearted, which was good considering how serious weapons are. He asked the audience how many people liked weapons, and most people raised their hands. He explained that his bad experiences with weapons in the past has led to him actually disliking weapons, but it’s his job and income and he does the best work possible.

What is a weapon in a FPS?

Evolution of Call of Duty Weapons

He explained that many weapons have licensing issues so they couldn’t say what the game was supposed to be, and by which manufacturer. Also that in earlier games it was difficult to get licensing, but since the success of the games weapons companies now come to them to see if they can get their guns in the games.

He then went over the process that a weapon gets into the game. They created weapons charts to track the process of weapon development.

He reiterated that throughout this process, they would have to keep confirming with designers that the weapons would still be included in the game to assure no effort was wasted.

30 attachments, 1 was cut because it broke multiplayer.

He showed how in-game gun models have all attachments attached but the unactivated ones are hidden.

From what I could tell, there was an alpha map used to apply camo to certain areas of the weapons texture.

He then showed some more tips to creating the weapons. 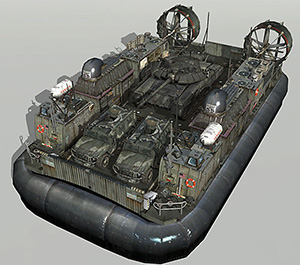 Hovercraft from Modern Warfare 3
Spend effort on what you see. Not much detail on the top or bottom of vehicles, where the player won’t see at eye-level.

The first part of this talk was given by David “DJ” Johnson of Infinity Ward. The first subject was the visual effects of the London train crash segment of Modern Warfare 3. 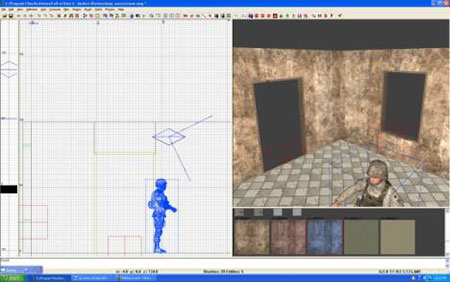 An example of the Radiant editor from Call of Duty 4

Effect Editor – Tour
He then gave a tour of their effects editor software.

The Golden Rule is that the game must always maintain a 60fps framerate no matter what. He then broke down how much time that really is, and how much of a budget they had for visual effects. 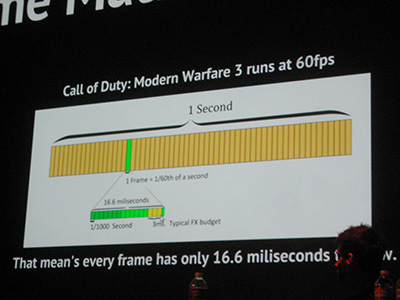 About 3 milliseconds visual effects budget for each drawn frame.

He then showed some profiler programs that show how much effects are used in a given moment of gameplay, and how long it takes to process them. He showed Pix, which is an Xbox specific profiler. It shows how long each layer of effects takes to draw.

He then went over the different types of FX.

Then he ran through a video of a stage in debug mode and showed how they would give an FX pass to different elements in the stage, highlighting problems that might show up and how to avoid them.

Next up was Sandy Lin of Sledgehammer Games. She focused on storytelling through visual effects.

The first part of her talk focused on the Berlin stage in the game. She started with going over the concept. 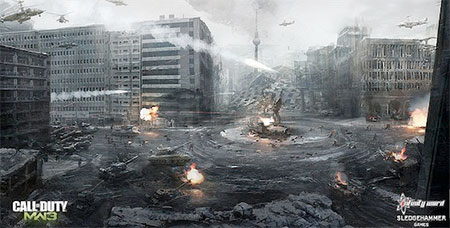 Concept artwork for the Berlin stage

The player would be entering a war-torn city. The scenes in the stage would tell the story of how the player visually discovers what is going on. And leads to a “big moment”, like a building falling in front of the player.

She talked a bit about how they planned out which effects would be taking place.

Creating the Berlin tower collapsing segment took 8 months and is one of the biggest “moments” in the game.

For another stage, where buildings were blown up and debris had to slide down a mountain, they used rigidbody simulation in Maya using Nvidia Physx.

There were a few questions asked for Q & A, I’ll just focus on one.

How was the story developed?

All in all, it was a great and detailed talk and I thank the speakers for taking the time to show how they made it happen!

The talk got my mind flowing. The complexity of some of the epic scenes in this game seem less daunting once understanding some of the process involved in the development. Interesting tidbits to me were the limitation of 2048 particles and being able to pull off a great variety of effects. I’ve been recently struggling to get more than a few hundred particles in Flash 11 using Away 3D 4, thinking that I need to 10,000 to make something awesome. Now I’m thinking of ways to use that limitation to pull off something nice.

While researching some Call of Duty Mod stuff for this post, I found very detailed instructions for scripting mods and using the game editors. It surprised me to see such a wealth of information of the game. I intend to look a bit into how the games system work and see if there’s anything to learn from their techniques. It was also a surprise (sorta) to find out that the Call of Duty engine and editor are descendants of id’s Quake 3 engine and tools.

Filed under: Everything, Video Games

Bryson Whiteman (http://www.sonofbryce.com)
Bryson is the guy behind all of the Sokay creations. Heading artwork and development, he's determined to make sure each game has a "distinctively Sokay" quality to them. He's always looking forward for a chance to experiment with new technologies to explore exciting ways to achieve fun.
« Donut Get! Devlog – April 19, 2012
Donut Get! Devlog – May 8, 2012 »