I’ve been posting a Devlog for our current game project Donut Get! for a while over at the TigSource Forums. I just posted over there and I’m doing a re-post here.

The following are a couple examples of how the artwork for the car portion of the game was created. 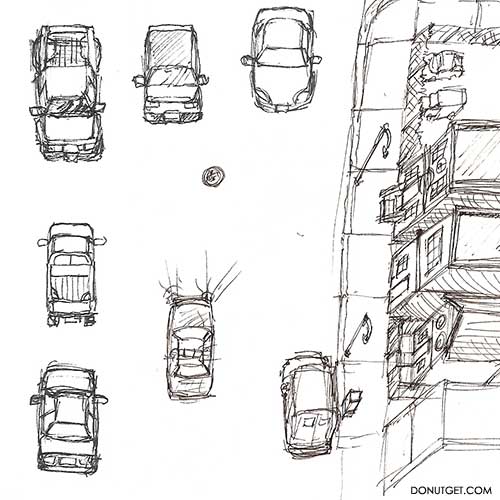 I used these sketches as reference when doing the vector linework for the game. 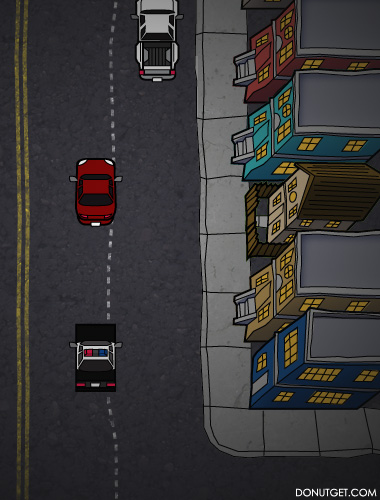 I imported the linework into Photoshop and added some color for the final look used in game. I used textures to bring some life into the flat colors of the artwork. Simple gradient overlay makes it look fancier than it is and gives a “night-time” effect.

For the past couple weeks I’ve been animating characters for the donut portion of the game and polishing gameplay.

Shown in this animated gif are Mr. Sprinkles and Officer Brown. Mr. Sprinkles is an NPC that will hang around and grab donuts as well.

I finally implemented new elements to the gameplay. Your objective is to eat falling donuts but you now have to dodge falling debris. Now that I started getting NPC animation in, I started filling in their different behaviors (like Mr. Sprinkles eating donuts).

The story is unfolding as gaps are filled in, I look forward to finishing the animation for the remaining NPCs.

David Rodriguez is just about done animating the fighting game segment. Tonight he sketched out some storyboards for a couple cinema scenes related to that segment. I’m very excited to have his animation in the game and playable!

Bryson Whiteman (http://www.sonofbryce.com)
Bryson is the guy behind all of the Sokay creations. Heading artwork and development, he's determined to make sure each game has a "distinctively Sokay" quality to them. He's always looking forward for a chance to experiment with new technologies to explore exciting ways to achieve fun.
« Sokay Play 6 @ Downtown LA Art Walk
The Art and Visual Effects of Call of Duty: MW3 »