Announcing: Donut Get! A Sokay Game

We’ve just released a teaser for our upcoming game, Donut Get! Watch it in HD on Vimeo.

Developed in Flash, it’s the story of greed going out of control. A cop catching donuts falling from the sky and his life spiraling into world of trouble.

Details will emerge as we creep closer to completion. Stay tuned into this blog and donutget.com . 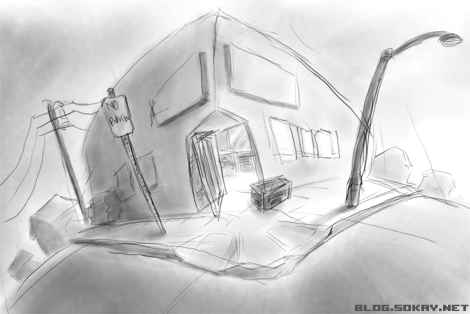 This is a sketch I just drew. A sketch from a scene in the world of our upcoming game Donut Get!

I’m working on some updates to Chris’ Rush Hour — here and there. Mostly jazzing it up with some supplementary artwork, just starting to tweak some level design.

Been playing a lot of PS3. Just got one in January. Gran Turismo 5 is my shit. Metal Gear Solid 4 has got a grip of me. Demon’s Souls scares the shit out of me. I’m flashing back with 3d Dot Game Heroes. And my girlfriends been rolling shit up in Katamari Forever.

It’s good to be playing more games. Good to have another perspective of gaming, from the PSX perspective. 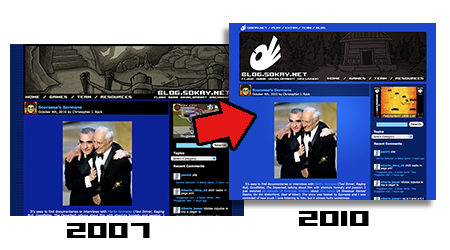 Tonight I finished an update to our blog theme. The new theme follows Sokay.net’s color scheme and design more closely — it’s bothered me that they looked similar but different. I like the direction it’s going and I’ll continue to revise the design sporadically.

Indiecade’s this weekend! Although Chris and I didn’t get our entries accepted, it was disappointing that they didn’t even bother to give feedback on our games — they basically said “we got too many entries. if you’re lucky, you’ll get feedback”. I’m suspicious as to whether they even played all of the games submitted. When Chris submitted Children at Play to Indie Fund, he was given a prompt and usefull feedback from Jonathan Blow. And he didn’t even have to pay an entry fee, haha. 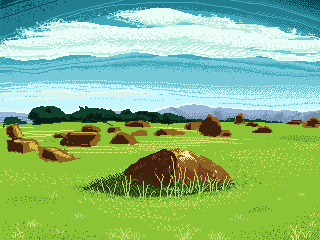 (this is a work in progress, yo)

To help me ease my mind, I’ve been working on this pixel portrait between running around in circles. I’ve been getting some assistance from the Pixelation community, check out my Work in Progress thread.

That’s it for today! 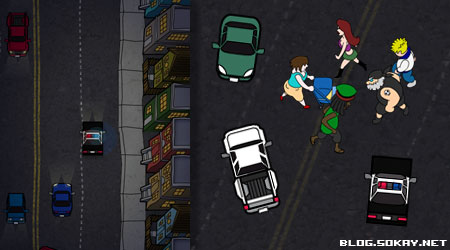 Artwork from the Car Segment of the game.

Work continues to progress on the Donut game. I’ve spent a great deal of the summer focusing on the Car Segment, which serves as an interactive intro. During this segment of the game, you play as the officer driving to the scene of the Great Donut Fire. You must drive through traffic, hopefully avoiding collisions with cars and civilians. The outcome of this section will be dependent on how you handle it — reckless driving will result in a ‘negative’ outcome where you don’t get to where you’re driving to.

With the Car Segment mostly wrapped up, I’ve moved on to focusing on the Fight Segment of the game, which acts as a mini-challenge within the game. David’s animating the characters for this part, the gameplay will be similar to Punch-Out!. I’m working on getting a skeleton of the game engine in place so that he can test his animation without requiring me to drop additional code in. Since this sections gameplay is so tied to the actual animation and timing, it’s important that he’s able to quickly iterate and test while animating.

The game is starting to emerge from the rubble and smoke. With every pass at detail and polish, it becomes clearer to see what the end result will be. While I chose to have the game mechanics relatively simple, I wanted to use them to play out a scenario and communicate ideas and themes from the world. This communication plays a larger role than it did in Thugjacker, where it was a bit more subtle, and is more integrated into the world than LUV Tank where it was much more blatant and abstract.

Most of the game artwork is done and in place at this point, but there’s a lot of animation that needs to be done. I’m doing planning for the game endings now, which will play a large role in the game. The way the game plays out will determine your ending — Way of the Samurai serves as my inspiration for this aspect. I’ve been thumbnailing these endings, working them out on paper while I develop the game.

So we’re done with that Indiecade submission nonsense. It served as a good goal for us, rushing toward the finish line. But in the end, it was just a checkpoint — a milestone — since there is still so much more to be done.

I’m happy that all of 3 games in the project are hooked into each other through the game scenario and most of the art assets are completed. We now have an even clearer idea of how the project is working so it makes the refinement process go much faster.

To the left are some game assets from the car game. I drew these cars in Adobe Illustrator, and made a few color variations. I’ve determined 11 variations aren’t enough so I’ll draw a few more and make additional colors to break up the visual monotony.

Since the last post, I’ve added Cryptic Circuitry’s music and sound effects to the game. It sounds great and it’s becoming more obvious what sounds are missing now. We need to take another pass at the sound now that it’s in. The sound is always the time consuming part that I spend little time at the end on. With the energy Cryptic’s putting into the sound design, I want to make sure it all works smoothly.

As far as the Sokay war with Chris Rock goes, I declare myself winning. As he is too much of a wusscake to post any news on his game. He claims his time “working on it” is much more valuable than posting on a blog. Pssh!

Here’s a bit of artwork I drew for the Donut game’s intro animation. It’s roughly animated so my man Cryptic Circuity can lay down some tunes for it while I tend to other areas of the project. My current focus right now is the top-down driving portion of the game. I should be showing bits of that part soon.

Chris has been touring Europe for the past couple weeks so don’t think the war is over. He’s just been readying the quiet before the storm. I’ve managed to gain some ground on him without having to sabotage his project, but his game was just about ready for a demo release even before he left. Regardless, both of our games are looking top-notch and I look forward to revealing more.

Some boards from the Donut game’s intro

I’ve been hustlin’ on the Donut game. In the past month I’ve been busting out on the collision for the car segment and the intro animation for the game.

I’ve been working with the other members of the team — Ricky, David and Cyptic Circuity — to organize our tasks. Ricky’s doing most of the game’s character art and animation, primarily the Car segment and the Donut segment. David’s doing animation for a Fight segment — he did LUV Tank’s in-game animation. Cryptic Circuitry is doing the sound, as he did with Sammy Samurai.

I’ve had an idea of what I’ve wanted for the intro for the game for a long time but I had been conflicted on how I could get the story across without it being too drawn out. As an introduction to the game, I didn’t want the intro animation overshadow the game itself. I also don’t want to devote too much time to it when I have a game to make! I want something that basically says “Here’s your character. Here’s your scenario. Now play!”

I think of my games as interactive animations so I’ll continue to explore this balance. I haven’t made an animation like this in a while but I’m having fun so I may grow accustomed to it. 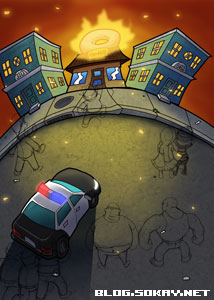 Some artwork I digitally painted for my Donut game

So I’ve been hard at work on this Sokay stuff but nothing much is ready to show yet. For the past month I’ve been cracking away at a new version of Sokay.net . It’s a bit of a subtle update, but I’m giving each game a profile page. I’m aiming to launch it with the release of Christopher J. Rock’s game, Rush Hour. He finished it a while ago and tried to find a sponsor but ended up starting work on a new game. He’s decided to release Rush Hour as a Sokay game, I’m proud to present it. You can read about it in Chris’ post about it.

I’ve been heavy in the art and interface of the Donut game, on and off for the past few months. I’ve finished most of the menu interface. I’m glad that’s together. Next I’m going to finish up the introduction game. The Donut game is essentially 3 mini-games tied together through a scenario. So far I have 2 of the 3 engines in prototype forms, practically alpha. A lot of the final artwork is in, but the gameplay’s missing a lot of features. I develop games heavily with the artwork in mind, so I tend to do more of the artwork upfront, which is the reverse of what many developers would recommend. I think they’re probably just more programmer oriented, rather than visually. 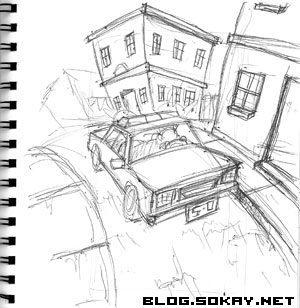 Here’s a sketch I drew for the game. Most of the art starts off like this.

So we continue, one step at a time. I look forward to showing ya’ll another game. It’s what I live for.

Indiecade 2010: A Call For Submissions (and War)

I read about Indiecade accepting submissions for the 2010 game festival on Gamasutra. If  you read this blog, you might know that we went to last year’s Indiecade and had a good time. I told Chris and he’s down for action! He wants to submit his upcoming game. I think it’s unannounced…

I see this as a threat. He may be my friend, something of an ally, but I will never let him make me look like a chump by outclassing me at Indiecade. Never!

So I now announce that we are at War.

This ain’t no East Coast/West Coast thing. We’re both representing Los Angeles, no problem there. Nobody’s getting killed. This war is more of an arbitrary goal to provoke motivation, sorta like Obama’s car MPG requirements for 2016.

Chris’ game is looking great. It’s a physics based puzzle game, he’s doing all the art and coding as well. In addition, there will be some procedurally generated music. This guy is nuts, but it works. A demo for it is coming soon.

I’ve been forever working on my Donut game. It’s looking great but I’ve been neglecting it because I’ve been doing long hours on a game I’m doing for my day job. And I’ve been working on an update to the Sokay.net site. When things get back on track, I’m gonna knock it out.

Donut Game is a Comin’!

It’s not apparent from reading this blog, but we’re actively in production of this Donut Game that I first mentioned here over 2 years ago. But you know what they say, “Time flies when you’re having fun!” 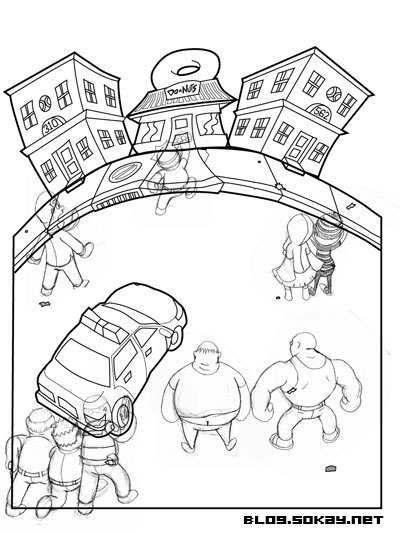 For a preview I’m just showing some line art from the game. Currently, this art is already painted and imported into the game. The background is my handywork and Ricky did the characters. END_OF_DOCUMENT_TOKEN_TO_BE_REPLACED