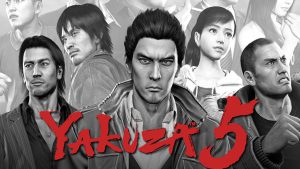 I’ve been in a good groove lately, jumping around with a handful of games that I’m really into. A bunch of games have come out recently and I’ve tried hard to focus on finishing or revisiting some games that I’ve had for a while.

Over the past couple weeks I’ve revisited Yakuza 5. I think I completed the main story of Yakuza 4 back in December of 2015. That was a free PlayStation Plus title that happened to be exactly the game I wanted to play at the time. I was always in love with the premise of the Yakuza series but never got around to playing them. Yakuza 4 gripped me hard with its overly excessive violence, fun gameplay and skill progression system. The story caught me a bit off guard for how good it was. In the end, I think it took me about 40 hours to complete, while I expected it to be somewhere in the 20 hour territory.

Now that you’ve got my backstory, Yakuza 5 was released on PS Plus almost immediately as I mowed through Yakuza 4. I was kind of fatigued with it at that point, and it didn’t help that Yakuza 5 starts off incredibly slow. A few weeks ago I was reminded that Yakuza 6 comes out next month so I decided to take another look at Yakuza 5. 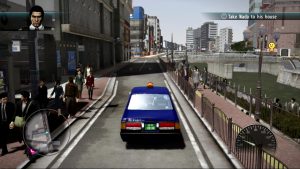 The game starts with the protagonist Kazuma Kiryu hiding out in a new city as a taxi driver. It starts you off having to do taxi missions and highway race battles (in typical over-the-top Sega fashion). Not so much fighting so it starts pretty slow. Once the game settled in, it’s pretty much more of the same. In this game, you’re running around a few blocks of Fukuoka. It’s a much more mundane environment compared to the red-light-district of Kamurocho, where the majority of Yakuza 4 takes place. I believe there are other cities in this game, but I don’t think they’re as big. I’m looking forward to what happens next as if I’m looking forward to the next episode of a soap opera. So many twists and turns and backstabbings. What you’d expect from a crime story.

I’ve been taking mental notes about the structure of the game. It’s basically an old school beat ’em up game but it’s got a lot of layer to it which make it more interesting. You’re free to wander the open map and get into random battles with enemies wandering the streets. The found the streets generally more restricted compared to the more open areas of Yakuza 4, so it can be more difficult to avoid battles when you’re not interested in fighting. You’re rewarded for fighting by gaining experience, which gives you skill points when leveling up. These skill points are basically used to make you more god-like by giving you greater abilities to grapple, dodge, and special attacks. 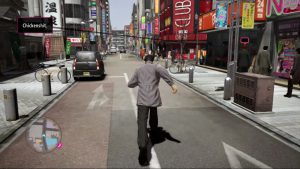 You can eat at various restaurants to gain buffs to stength, defense, stamina and your life bar. You can craft weapons and armor. And there’s an endless amount of side content that you may be awarded for (missions and mini-games). I like the semi-non-linear approach and I’m starting to consider something like that for a future game. I really love the idea of an open town hub, that also has random battles.

The Heat system is main event when it comes to fighting in Yakuza. These are special attacks that you can use when charging a special meter by damaging enemies. It also drains when you take damage. All you have to do is press Triangle next to an enemy while your Heat guage is above a certain threshold. The best part is that it’s context sensitive so the action will change depending on where you are in the environment (smash an enemies face into a pole), which item you’re holding (smash a fallen enemy with a bike), or what position you’re in (being grabbed from behind). This can be fun to setup a situation where you can execute the most devastating attack. It helps break up the monotony.

I don’t think any of this is new for this game but the actual Heat attack animations have been switched up. I believe you switch to other characters later on in the game. In Yakuza 4, different characters had slightly different fighting styles which helped switch it up a bit. I’m looking forward to seeing where it goes, but I think I just really want to see what a Yakuza game looks like on PS4. I’m hoping I can make my way to Yakuza 0 and Yakuza Kiwami soon. 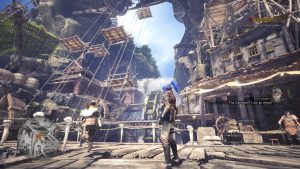 I started playing Yakuza 5 after taking a break from Monster Hunter World. I think I dropped like 20 hours into that in just a couple weeks. I had to step away from it before it consumed me. Once I got a general idea for the loop of the game, I felt like I got a good enough taste for the moment. I still haven’t managed to get together with friends online so I’ve been missing a bit part of it. It’s a spectacle of a game though. Massive worlds with incredibly intricate world design. One of the showcases of the game is the design of the first level, which is a dense forest with many interwoven levels. It just makes me wonder how they put it together so seamlessly. 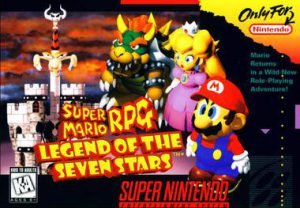 Super Mario RPG has been a favorite of mine since childhood but I never beat the last boss. I made it to the end and was disappointed that I needed to grind to face the last boss, as I got destroyed. I think this game is every bit of the masterpiece that I remember it as, but it’s still surprising to see some of the design decisions. I think what’s kind of shocking is that it’s pretty challenging. I play bits and pieces of Chrono Trigger very often and I feel like Super Mario RPG might have a higher difficulty overall. It’s kind of surprising, at least, because it kind of comes off as a “game for kids.” It does help you out in clever ways like giving you “freebie” items randomly when you use an item. Or other random perks like getting another free move or restoring your HP. One big difference from other Squaresoft RPGs of that era is that when you die, you restart from the last save point with your progress in tact. I think this is very helpful for RPG newcomers but very progressive considering that’s what games typically do today. And yes, I have died a lot on this playthrough. haha! At least early on. 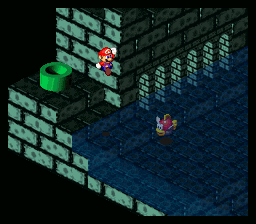 One area of the game that stood out to me was the Kero Sewers area. It’s a kind of tricky area relatively early in the game. Similar to Lost Woods of the Zelda series or the Forest of Illusion of Super Mario World. This area basically leads you around in circles unless you’re observant. I’m sure this was no big deal to me back in the day, but I feel like it’s considered “bad game design” nowadays. I’m sure this is an area that a lot of people got stuck back in the day. When Googling “Super Mario RPG sewers”, “How do I get past Kero Sewers?” is the top post. This makes me wonder if I should design something like this into a game – an area where it’s a bit of a puzzle to figure out a solution to. I just finished Super Metroid and a large part of the enjoyment of that game is overcoming such obstacles. I think we shouldn’t be afraid of players getting stuck.

The limited item inventory of Super Mario RPG simplifies things a bit so that you know exactly what items you’re holding at any given time, but can make it challenging when you end up plowing through mushrooms. Coming back to it, it’s amazing to see Squaresoft at arguably their highest point doing amazing justice to the Mario IP. 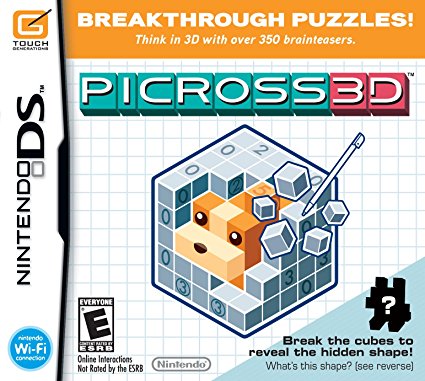 I found my copy of Picross 3D digging through old games. I love this friggin game. It’s living on my 3DS right now and I’m playing it to clear my mind at any given time.

Bryson Whiteman (http://www.sonofbryce.com)
Bryson is the guy behind all of the Sokay creations. Heading artwork and development, he's determined to make sure each game has a "distinctively Sokay" quality to them. He's always looking forward for a chance to experiment with new technologies to explore exciting ways to achieve fun.
« Road to Raybeem – VR Music Visualizer