Warning: "continue" targeting switch is equivalent to "break". Did you mean to use "continue 2"? in /nfs/c03/h06/mnt/48256/domains/blog.sokay.net/html/wp-content/plugins/jetpack/_inc/lib/class.media-summary.php on line 87
 What I've Been Playing: September 22, 2011 - blog.sokay.net 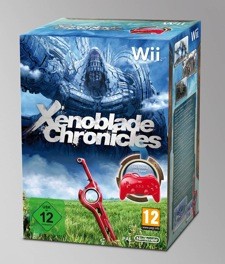 I’ve been excited to get started with Xenoblade for Wii. I imported the Limited Edition with the red classic controller from game.co.uk. I had to mod my Wii to play it because I wasn’t going to let Nintendo of America get between me and the game!

I’m a huge fan of Xenogears and I’ve heard that this game is one of the best RPGs in recent years. Something with that JRPG feel that you know and love. So far so good, the game hooked me from the start with it’s intro setting up the conflict and letting you explore a world living on top of giant robots.

The game focuses a lot on exploration, you get experience by traveling to new area and discovering landmarks. The flow of the game is super quick — it even lets you transport to any landmark you’ve been before at just about any time.

Battle system’s a realtime-menu based one — those are all of the rage these days. I’m not amazed by it yet, but it’s easy to understand from the get-go.

Here is an example of how the battle system plays out…

My time’s been split with Zelda: Ocarina of Time for Nintendo 3DS. 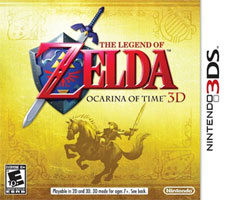 I wanted to get a 3DS when it came out. Beyond it being expensive, I managed to convince myself not to get one because there wasn’t even anything I wanted to play on it. But I played Zelda at Target for about 3 seconds and I knew I had to buy one. I waited a few more weeks and the price dropped.

Words can’t explain how amazing this game is. Each part has such intricate attention to detail, I can’t think of many games that compare to it. The 3D looks great but you sorta get used to it after a while. But it’s the graphical overhaul that really makes it worthwhile. Higher resolution textures, new models (Link has fingers now), better character animation. But they didn’t mess with the timing of anything, feels exactly the same. The controls are annoying sometimes — partially because it’s an old game and partially because of the 3DS stick.

I want Nintendo to make another game on par with this!

I’ve also been playing some Final Fantasy 13 on PS3. 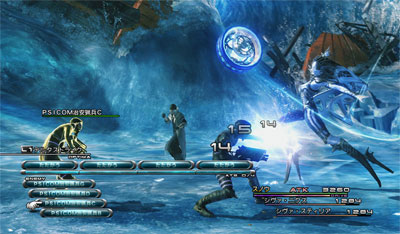 It’s by far the most consistently beautiful game I’ve ever played. It got a lot of flack for its linearity and how the first 10 hours of the game are basically tutorials for the battle system — but I believe it got a lot more criticism than it deserved. It was questionable that they hold your hand through so much of the earlier battles. They reveal features of the battle system slowly, and it’s easy to win by just tapping X as fast a possible. But once you start to get an understanding of the whole system, it’s very awesome. Story does seem pretty lame though, unfortunately. Everything else is top notch.

I like that it’s very easy to pick up and play. The linearity does help me jump in and play 30 minutes before I go to work or some other times like that. Not having to remember which quest I was on the last time I played it helps me come back to it and progress speedily.

It’s interesting how these RPGs are streamlining gameplay to make them more accessible to their aging audience. The last RPG I finished was The Lost Odyssey and that was very old school, which I liked, but made it so that you had to dedicate yourself to it (2 hour long dungeons with few save points) to move forward.

Bryson Whiteman (http://www.sonofbryce.com)
Bryson is the guy behind all of the Sokay creations. Heading artwork and development, he's determined to make sure each game has a "distinctively Sokay" quality to them. He's always looking forward for a chance to experiment with new technologies to explore exciting ways to achieve fun.
« Donut Get! – Shoppe Burn Animation
Indiecade 2011 This Weekend! »