Warning: "continue" targeting switch is equivalent to "break". Did you mean to use "continue 2"? in /nfs/c03/h06/mnt/48256/domains/blog.sokay.net/html/wp-content/plugins/jetpack/_inc/lib/class.media-summary.php on line 87
 Flash Game Ballin': Bubble Struggle - blog.sokay.net 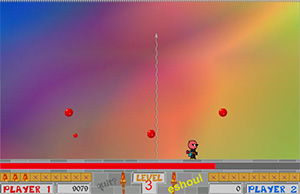 I found an inspiring forum post by kreso, the Croatian creator of the Bubble Struggle Flash games. He made a thread asking if anybody wanted to buy his sites that generated $10k a month. Many posters weren’t taking him seriously but he stuck to his claims , adding that about half was generated Mochiads and the other by CPX advertisements.

In the end, he found a deal and left an informative post about the story of his game. How , when he was a kid, he sometimes stole his parents money to play the original at an arcade. How he wanted to make a Flash game more compelling than the lame Flash games running rampant. How he sold the game to Miniclip for only $750 way back when, after initially offering $250. Good stuff.

Check it out here:

First hours spent on creating Bubble Struggle 1 were actually practicing programming. I created a box that was moving left and right on keypress. Amazing! Then I added bubbles. Wow! Then the harpoon (shot) etc… After I realized that I have all the basic elements of a game I noticed something about internet and got an idea!

What I noticed was this: all of flash games on internet are either a) short in duration (you can finish the whole game within 5-10 minutes) or b) so boring that you don’t want to play it more than 5-10 minutes.

My idea was – what if I would create a game that is a) long in duration b)had a new, different chalenge on every level.

I knew that this ment more programming for me, but as I was just learning and enjoying progamming this was actually a plus. A sidenote: code in my game is disastrous. I just kept adding code for each new level because it was so different than all the others. But I succedded!

If you somehow haven’t played this game before, it’s basically a clone of Buster Bros. It’s a great game and I’ve been wanting to 1-up him by making a game like it myself.

This is one of those “one in a million” success stories that you read about in articles like Gamasutra’s Where’s the Cash for Flash? but it’s definitely encouraging everytime I hear someone having success doing what they genuinely enjoy. Kind of an unfortunate contrast to news that Xbox Live Community Games has yet to yield much success for its developers.

Bryson Whiteman (http://www.sonofbryce.com)
Bryson is the guy behind all of the Sokay creations. Heading artwork and development, he's determined to make sure each game has a "distinctively Sokay" quality to them. He's always looking forward for a chance to experiment with new technologies to explore exciting ways to achieve fun.
« Good Multi-player Design Elements
An Evening with Naughty Dog: My Notes »