Warning: "continue" targeting switch is equivalent to "break". Did you mean to use "continue 2"? in /nfs/c03/h06/mnt/48256/domains/blog.sokay.net/html/wp-content/plugins/jetpack/_inc/lib/class.media-summary.php on line 87
 Resources Archives - blog.sokay.net

Raybeem is available on Steam for Oculus Rift & HTC Vive.

Raybeem is the first VR project from Sokay. It’s not 2D. It’s not a game. Yet, it’s as close to my heart as any of the previously released Sokay products. I spent 2017 working full-time on Raybeem. I can describe it as a whirlwind, which was hard to make sense of while I was in the middle of it. I’m writing this mess to dump what’s been going on in my head into a huge blog post.

Raybeem is a virtual reality project that started out as a desire to listen to my favorite Drum & Bass station, Bassdrive.com, in Virtual Reality. As an adolescent, I spent dozens of hours of my life gazing at Winamp visualizers. Switching through visualizations to find my favorite, tweaking settings, and downloading new ones.  This was the prime way of listening to music for Bryson in the year 2001.

This was my dream for 2017, listening to Drum & Bass music in VR. In a world of my creation.

Raybeem’s been a large project for me so I’ve had a hard time figuring out what to say about it. At it’s core, I consider Raybeem to be a VR music visualizer. That was the starting point for the concept, anyway. I just wanted to create an application for listening to music in VR. The different visualizations in Raybeem are thought of as “Themes.” The way I imagined, a Raybeem theme is any environment that reacts to music in some way. So a theme could be anything – realistic or abstract, interactive or non-interactive.

When I started working on Raybeem, I had a strong idea of what I was trying to build. As it turned out, even with all the notes, sketches and prototypes, I fooled myself into thinking it would be less work than it was. Here’s a brain-dump of a lot of the things I figured out on my Road to Raybeem’s release. END_OF_DOCUMENT_TOKEN_TO_BE_REPLACED

Yes, the title is a mouthful. The book itself has a lot of writing as well at over 500 pages, so I’ll try to keep this short. If you have an interest in knowing what the Japanese industry was like “way back when,” or you want to know the story behind some of the cherished and/or niche titles you grew up loving, this might be the only place for you to get a glimpse of that world. END_OF_DOCUMENT_TOKEN_TO_BE_REPLACED 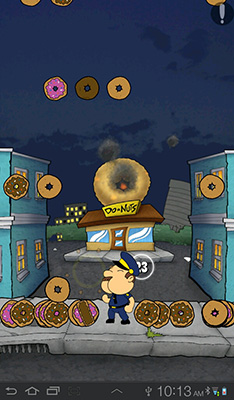 We recently released Donut Get! on iPhone and Android. It was originally developed in Flash and we made the mobile ports in Unity. One of the challenges of porting was figuring out how to bring the game’s Flash animation into Unity. Here’s the “quick ‘n dirty” solution I came up with.
END_OF_DOCUMENT_TOKEN_TO_BE_REPLACED 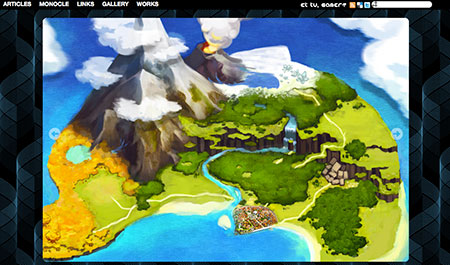 I found a link to et tu Gamer? in the comments to a Gamasutra article about game preservation. Right away I saw that this was without a doubt a site worth bookmarking. The homepage features galleries for a select few games but the gallery section contains a comprehensive archive.

Apparently the creator is attempting to archive as much video game art as he can get ahold of. The I’ve seen so far is incredible quality and definitely worth a gander. 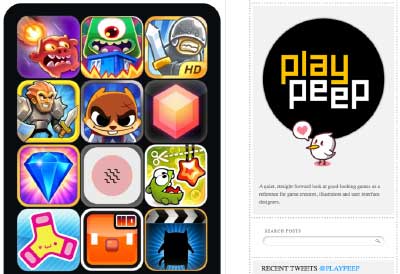 A great site popped up in my Twitter feed a couple weeks ago, Play Peep. It’s a great resource for game art reference, especially in the area of UI. The site seems to have a focus on mobile phone games, with a bit of additions from social games and the 3DS game Pushmo. While many of the games have a similar “poppy” graphic look to them, it’s interesting to see how different teams have tried to differentiate and how they go about solving layout of UI elements in their games. Compare and contrast.

Some posts that stand out to me: