I just heard about Eve Online’s Player government setup and man am I jealous. 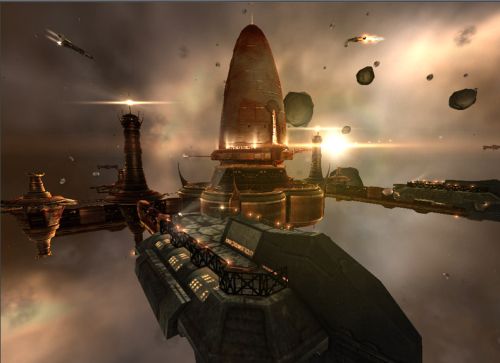 This is a voting booth.

It’s great that they’re exploring the area of player government, but it sounds like they’re being somewhat timid about it. The players don’t seem to have a tremendous amount of power and the governmental system within which elections are occurring was constructed and is enforced by the developers rather than emerging organically from the players themselves. It’s not a bold step, but a step nonetheless.

This has prompted me to publicize some of my own experiences in regards to player governments. Anyone I’ve seriously spoken to about games has heard all about these because I’ve found them to be unique and tremendously valuable.

I’ve never been an Eve Online player. I heard about it, but wasn’t too interested until my friend Michael suggested it as something similar to Battledawn. I met Michael while participating in his beta session of Battledawn from the summer of ’06 to the next winter, and by summer ’07 I’d officially joined the Tacticsoft team (constructed almost entirely of beta players). Beta testing mostly involved forum conversations that went on for pages and pages, going over problems, new ideas and possible sources for inspiration; sources like Eve Online (which was often cited). 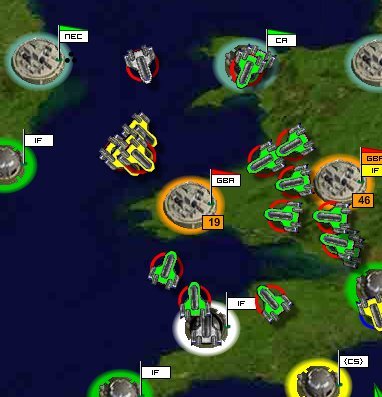 Nothin like a good, old-fashioned, down home, full-scale invasion. Apparently this is the SS alliance warring against GBA (Spring ’07).

Battledawn allows players to form alliances and compete for world domination over a GoogleMaps style Earth. I loved playing because the game has a very simple interface, but is incredibly complex for purely social reasons. Players quickly develop a variety of relationships. You play the ruler to those you conquer, the victim to those that conquer you, leader to the alliance you command, subordinate to the alliance you join, diplomat, rival, uneasy acquaintance, propagandist, informer, misinformer, the list goes on and on. There are no player classes. You never designate yourself as any one of those things, but you play those roles because the game presents you with a social environment in which you can. The roles emerge naturally in the game, as they do in reality. Unlike other strategy games in which players race mindlessly like machines, Battledawn is Machiavellian. No one can win without the help and downfall of others. It demands the same kind of analytical mind as other games, but with the human touch of politics. 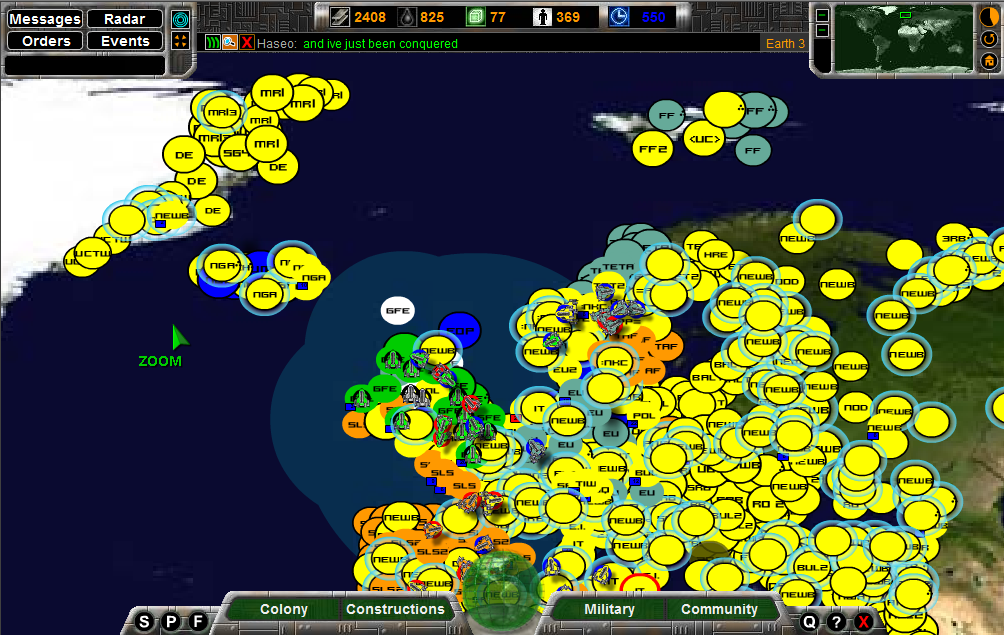 The world of Battledawn is densely populated and highly competitive.

Those dynamics led to many discussions on the nature of government in games; what we’ve witnessed emerging and how we can tamper with it. A number of implementations came from those talks, but it was ultimately decided that anything truly ambitious would be saved for another project (as yet confidential). I can’t say how much just anyone would get out of the game by starting it up and hoping for the best. I was lucky to start at the very beginning of it all, when I could watch it grow, but the game is just as much a social web as ever. You can’t really grasp it unless you actually decide to compete and pay attention to what’s going on and who the big players are. Much of the political action happens on the forums, or other outside sources. Some players even start independent forums for alliance use only (a good security measure).

Often in these talks with Michael I brought up another experience with this same issue, a college course called Utopia.

The class was the creation of a one Brian Lane, a writing professor in the CSULB film department. Brian has worked in television and film among many other areas, including law. He enjoys sci-fi and the flavor of complexity, so it should come as no surprise that he combined the classroom environment with a D&D style game. At the beginning of the class I was assigned a planet, I created inhabitants for that planet, described their development and history, their trajectory, and for the following semester, I submitted at least 1 essay a week explaining my “moves.” “Moves” were basically creative writing exercises that demanded that we provide believable explanations for everything that we wish to occur around our planet and its inhabitants. The goal, as described by the class, was to create a Utopia. The challenge was that our planets neighbored the planets of other players. Our Utopias were not isolated, so they had to account for the unexpected imperfections of other so-called Utopias. 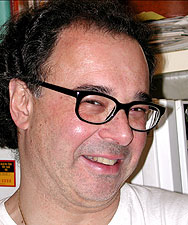 When the class began, the majority of students thought it was a waste of time, but were assured an easy A and a GE credit, so they stuck to it. Obviously, there was a group that announced their plans for universal domination from the start. I had decided to play benevolent, but there was no way in hell I was going to let anybody dominate me, so without saying a word, I prepared for war.

Most students became isolationists to preserve their Utopian society. Many quoted ethics when they structured their legal systems and severely limited the lifestyles of their creatures in the name of peace and happiness. Others were clearly aiming for the most horrible monsters or high-tech weaponry they could get their hands on. I decided to try a bit of everything. I created 2 major species: one highly advanced and intellectual, the other practically indestructible and savage. I filled my world with chaos and war so that later I would have a solid argument when explaining the military, technological, or evolutionary superiority of my creatures (they’d been through a lot, so they were capable of a lot–case closed). What happened was highly unusual.

In my haste to defend against less trustworthy players, I ended up becoming a major military presence in the game, deploying interplanetary reconnaissance and military fleets before just about anyone else had realized space travel was possible. I only became aware of my lead because Professor Lane eventually announced it to the class, which was very upsetting. I guess he thought I was having too easy of a time catching the others with their pants down, claiming all the power for myself, so one day he mentions to the class that I have secret bases parked outside of everyone’s planets, just watching what they’re up to. I had made some friends at this point and we were cooperating, but most people didn’t know about those activities and they weren’t very happy to find out. This was an incredible turning point for the class.

I explained that I was totally peaceful and I only constructed these tools to defend against malevolent forces (Playing an idealist was half the fun). Those I had befriended defended me, I had helped them get ahead and promised to help anyone else that wanted it. But not everyone would trust the guy holding all the guns in the universe (I don’t know why).

Many of those that didn’t care at all about the game became suddenly impassioned. Class sessions were no longer about legal and philosophical rhetoric. Now the teacher sat down and let the students take the stage with lively debates on ethics in government and foreign affairs. Among other topics I ended up arguing over the role of the United Nations. Once there were threats in the game, threats that students couldn’t predict or control, everyone took it seriously. I had claimed unwarranted power over fictional worlds belonging to other students and they didn’t like it. It was once a game, and then it was real.

One guy more than others distrusted me (one that started the game claiming that he would conquer us all) and announced himself to be my mortal enemy. The class split into three groups. One supported me, one the other guy, and the last group just wanted to stay out of trouble. It was then that all hell broke loose. I worked with a number of others to organize a government under which we could ensure stability and peace and we had much success. And of course, our competitors generated competing government to counter us. It was all very Cold War of us, but those seeds of fear were enough to perpetuate conflict to the very end. Not to say that my behavior in the game was purely idealistic. I also participated in spying, espionage, trickery, and eventually handed out weapons like lolly-pops. I found myself arming the universe while simultaneously playing the architect of peace and I never felt more at one with the United States. The whole thing was a lesson in human behavior, in confrontation and psychology, in game theory.

I hoped to help modify the game for the next run through, but I wasn’t able to. The class changed and became much more controlled. More guidelines were enforced and it doesn’t sound like it ever achieved the same kind of vitality that it had the first time through (or the same level of nonsense; a trade-off). I almost forgot to mention that much of the class’ interactions occurred via MySpace. In fact, my old page is still up. You can still find the old constitutions we hoped would end the ongoing struggle. What a weird class. . . .

Before taking part in Utopia or Battledawn, I was already somewhat predisposed for seeking a venue for governmental experimentation. I think I’ve always had interests in that area. Nonetheless, I’m sure if anyone goes in willing to pay attention to the nature of any similar environment, there can be found many lessons in the science and art of government architecture and how players can act as the architects. After all, there was a time when no governments existed in the world, but somehow they were generated. They will continue to be generated whether developers or administrators enforce them or not. So why not embrace and exploit them?

I get the feeling that the administrators of Eve Online will be maintaining some strict control over their world. They’ve already demonstrated their control by insisting that the player government be democratic. It’s understandable that they fear too much freedom for players, but I still consider it a mistake.

Give the power to the players.

Filed under: Coolio, Everything